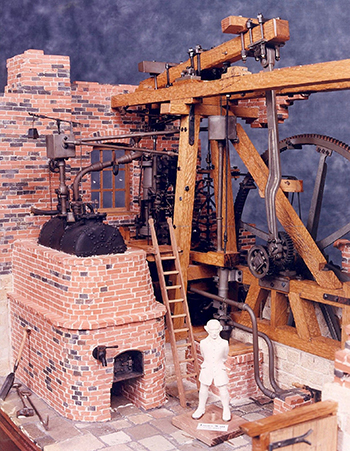 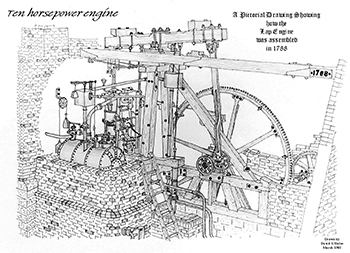 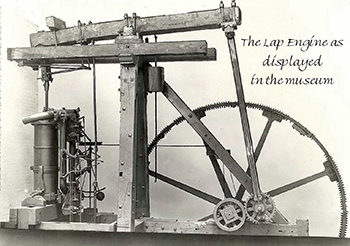 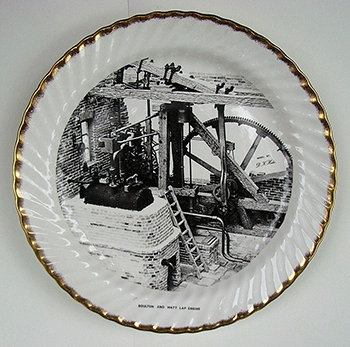 In 1788 James Watt designed and built a beam the sole purpose of which was to provide the rotary drive for the lapping and polishing machines at Matthew Boulton’s Soho Manufactory at Handsworth in Birmingham. This engine is possibly the most famous rotary beam steam engine in the world and, is now preserved in the Science Museum South Kensington. The Lap Engine is one of the first engines to have its power output rated in horsepower. The drawing below shows how the engine would have appeared in 1788 when it was first assembled at the Soho Manufactory.

This type of engine was used to drive machinery which previously had been driven by horses and, customers asked James Watt, “how many horses will one of your engines replace”. A simple calculation established that the engine would do the work of ten horses, and became Boulton and Watt’s standard ten horsepower engine, and in 1788 this engine cost £800.

The piston was powered in both directions and was called a double action engine. The expansive force of low-pressure steam was applied to one side of the piston and a vacuum which had been created using James Watt’s separate water cooled condenser was applied to the other side. The Lap Engine is the first engine to have its rotational speed controlled by a centrifugal governor. In 1788 the Lap Engine drove forty-three individual machines which were used for the lapping and polishing of small manufactured articles.  The support structure of the engine was made from English oak, all held together with wrought iron straps and bolts. The engine operated at the Soho Manufactory until 1858.

However, in the Science Museum where it is now preserved it is not assembled as it was originally used. It is now displayed with the lower half of the flywheel below the working floor level. At the Soho Manufactory, the whole diameter of this wheel was above the factory floor as can be seen on the Lap Engine in miniature. The flywheel was 16 feet in diameter and was fitted with 304 wooden gear teeth, these teeth were used to drive a counter-shaft which drove each individual lapping and polishing machine.

The model is the result of an extensive search to rediscover what the engine originally looked like when James Watt designed it in 1788.

The Lap Engine also drove the blanking presses which producing blanks for the Boulton Coinage in 1797, the most notable was known as the cartwheel, a heavy copper coin valued at two pence. Note the Sun and Planet method of obtaining rotary motion, fitted to avoid litigation by infringement of James Pickard’s patent for the crank method of achieving rotary motion.

The ceramic figure shows James Watt standing by the model of the engine. Shown on the left is the original engine as displayed in the Science Museum South Kensington.

The photograph below shows an image of the Lap engine in miniature fired onto a bone china plaque using a technique which had been developed within the Development Department at Royal Doulton. Only one plaque with this image was ever made.

By watching the video above you can see the Boulton and Watt engine working as it would have done in if you would like to see all the engines working visit us at Stone where up to 10 visitors are most welcome. The engines are displayed in a gallery within our home. For a small we even give biscuits and a cup of tea. Ring 01785 818773 for details for your visit.