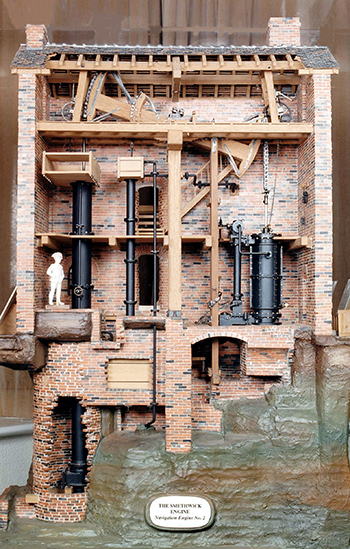 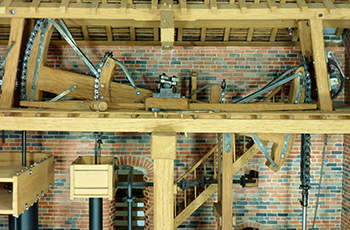 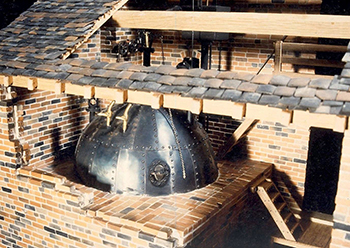 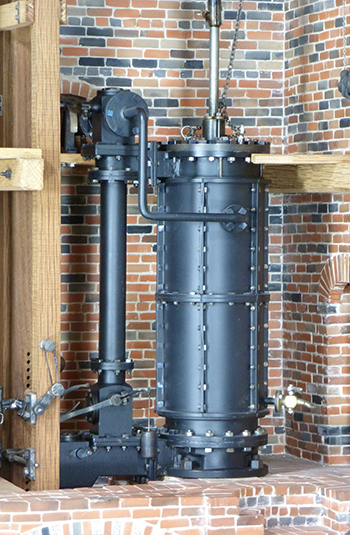 This engine was designed by James Watt for the Birmingham Canal Navigation Company and went into service on May 27th, 1779. The engine was used to conserve water by pumping it back up a series of canal locks. The principles used on the Smethwick Engine completely revolutionized steam engine design. The miniature shown here has a height of 72 inches and a width of 36 inches and, 38,000 bricks were used in the construction of this sectional building.

By the late 1770s, there were seventy-five Newcomen engines working in the mineral mines in Cornwall and, within four years all been replaced by this new design. The Watt engine was more powerful and also consumed less coal. The Smethwick Engine is the first in the world to use the principle which became synonymous with James Watt. It became known as a three-valve engine.

His design eliminated the need for the heating and cooling of the cylinder on every working stroke of the cylinder. James Watt took out a patent for this idea which was applied to the Smethwick Engine. The engine at Smethwick became the first to use both the expansive force of steam and a vacuum at the same time. The vacuum was created within the separate condenser, low-pressure steam was then applied onto the top of the piston and the vacuum was applied onto the underside of the piston.

The engine pumped the water on the Birmingham canal system until 1891, often working twenty-four hours per day only stopping for maintenance and repairs. On each stroke of the piston, 170 gallons of water was lifted to replenish the canal at the top of the flight of locks and, for each minute the engine made ten pumping strokes. The powering cylinder of this engine was 32 inches in diameter and the piston made a working stroke of 8 feet.

The miniature is the culmination of ten years research by the Birmingham Science Museum and, a further three and a half years were needed to research the construction methods of the original engineers, and then complete the engine in miniature.

My new book published in 2018. MECHANICAL WONDERS THE ENGINES THAT CHANGED THE WORLD- gives the details of how this engine was made in 1778/9 and also how I researched the engine and made the miniature. So comprehensive was the research from the  Kew Records Office that on completion the Birmingham Canal Navigation Company had to pay the numerous contractors £2095-14-2d for this engine. Both the Newcomen Engine and the Smethwick Engine are compressively detailed in my new book.

The overhead rocking beam of the Smethwick Engine was supported on an oak framework within the roof of the engine house. All held together with wrought-iron straps and bolts.

The powering cylinder was encased within a segmented jacket, designed by James Watt to maintain a constant working temperature by surrounding the cylinder with steam directly from the boiler.

The steam needed to run the engine was from a haystack boiler positioned within a lean-to at the rear of the main engine house.