The Engines That Changed The World 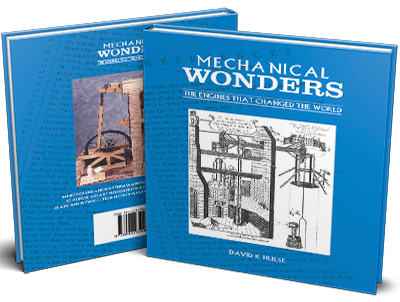 This book extending to 479 pages is the result of 45 years research, needed to construct the engines that changed the world in miniature. Not only does the book cover how the original engines operated from 1700-1800:- also covered is how the pioneering engineers of the eighteenth-century developed these engines; which became the catalyst of everything we accept and use today. There are 72 pen and ink drawings by the author, 150 colour photographs and 151 greyscale images.

I first saw David Hulse’s collection of working model stationary steam engines in 2015. David had built these machines over many years in a specially equipped workshop in his home. Watching the engines work was an amazing sensory experience and listening to him describe how they were made revealed his talent as a communicator in explaining complex technical processes to others.

David had been a senior engineer working for a leading ceramics manufacturer and his precise mechanical skills provided the professional foundation which enabled him to build his creations, but there is more. He has a deep-rooted interest in the history of technology and the contributions that practical men, before the advent of the profession of mechanical engineer, made to the development of eighteenth-century steam technology. He conducted archival research, exploring diagrams, drawings and letters from the time, examined original engines in museums and consulting leading experts in the field. He brought his imagination as a solver of problems to understand how technical challenges were overcome at the time, which he then applied to the practice of crafting his handiwork.

The results are seven replica examples of eighteenth and early nineteenth-century atmospheric and steam engines, originally created by Thomas Newcomen and James Watt;-two famous figures of the Industrial Revolution;-James Pickard, Matthew Wasborough, Francis Thompson, Adam Heslop and Richard Trevithick;-less well-known, but still very important inventors. Powered by electricity rather than steam, they are accurate in every detail down to individual metal plates, rivets and bricks. Collectively, the original engines were central for the development of modern mining and manufacturing and mark the beginning of a world heavily dependent on technology.

David’s book charts the work of these men and the machines they fashioned, but it is much more than this: it is illustrated by photographs of his models and inspired by insights he has gained from making the engines. These enable the reader to appreciate how the original machines were constructed and operated in practice, but the publication is more than a conventional history of steam engines of a tribute to the practical minded inventors and mechanical engineers of the eighteenth- century. The book is a record of David’s enterprise and expertise, interwoven with historical understanding. It is an autobiography of his journey to understand and replicate a remarkable period in the history of technology. 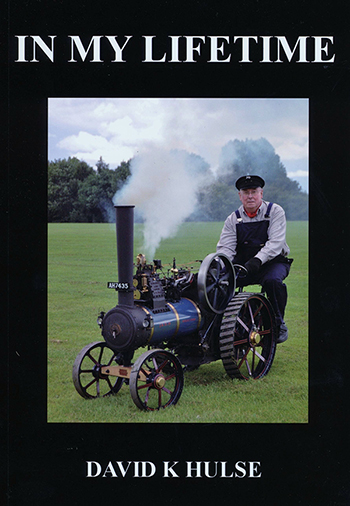 In my lifetime was published in July 2012.  Chris of TEE Publishing kindly wrote this preface.

“David Hulse is perhaps best known for his carefully researched models of early steam engines, engines which started the industrial revolution and which in turn made England a leader in the technology of the time.

David’s early life was spent in the Staffordshire Moorlands where his family had taken up farming. In my lifetime recounts these early days and describes what life was like. He covers his early interests, his apprenticeship, and his travels throughout Europe, challenging journeys at a time when the Iron Curtain was very much in place and the dangers were very real.

In later life, David moved on from riding and restoring motorcycles to researching and building the unique models for which he is so “justly famous.”

David Hulse is probably best known for his superb researched and constructed models of static steam engines; his one-sixteenth scale model of Thomas Newcomen’s engine has been featured on Blue Peter.

In his book, In My Lifetime, David recounts his early interests and how his apprenticeship and travels around Europe all built towards his interest in steam power.

Unlike Hulse’s other books, which focus more on his engine models as well as the early pioneers of steam, In My Lifetime is much more personal. His autobiographical approach not only reveals a man with a great engineering mind but someone who has lived a lifetime of adventure too.

Hulse spends a chapter of the book recounting his memories of his father, Ken Hulse. Ken was obviously a great influence on David’s life and he describes a man who fought in the trenches of World War 1 with great warmth and clarity.

Following on from this, he describes his travels around Europe during the days of the Iron Curtain riding one of his beloved motorcycles. These tales are fraught with peril and anecdote and create a much rounder image of a man who many of us have been reading about for years.

One more credit he can add to his name is that he has become quite the photographer over the years, and many of his adventures, not to mention his steam engines, have been beautifully documented and can be seen throughout the book.

If you have read one of Hulse’s books before, In My Lifetime is an absolute must.

This is the first of three books based upon the research I have carried out over the past 30 years into eighteenth-century engines which have been published by TEE Publishing. “The Early Development of the Steam Engine” chronicles the development of the steam engine from 100 AD until 1779. This book is the only account which has been written describing how the world’s first engine designed by Thomas Newcomen actually operated in 1712. There are 160 pages with 115 illustrations and drawings.

The details of the Smethwick Engine are given from its first commissioning in July 1778 to its final operation pumping the water up a flight of six canal locks in Birmingham. The finer details for this engine were obtained from the Kew Record Office London. 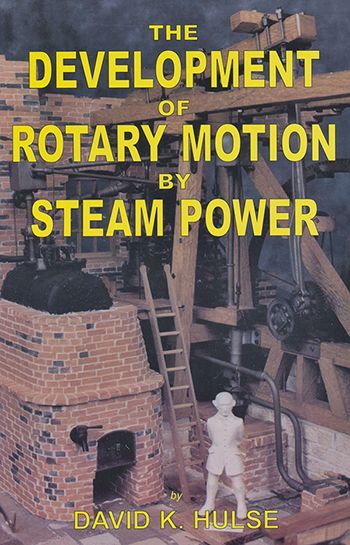 My second book called ‘The Development of Rotary Motion by Steam Power’, describes from 1779 the first engine to achieve rotary motion by the use of a crank and flywheel. This was patented on the 23rd August 1780. Also the Boulton and Watt Lap Engine of 1788, the first engine to have its rotational speed controlled by a mechanical governor.

This book extends to 146 pages with 92 illustrations and drawings, and also included is a comprehensive glossary of terms that the engineers of the eighteenth- century would have used. 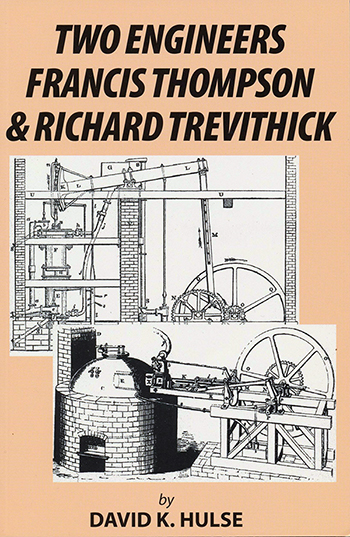 My third book covers the two engineers Francis Thompson and Richard Trevithick; Thompson was an engineer employed by the lead miners of Derbyshire to solve their drainage problems and was also the engineer responsible for the design and installation of the Arnold Mill Engine, Nottingham in 1797.

Richard Trevithick was the engineer who developed the high- pressure steam engine in 1802 and also introduced many innovations used on engines throughout the nineteenth- century and into the 20th century. The book describes in detail many of the engines he designed and developed.