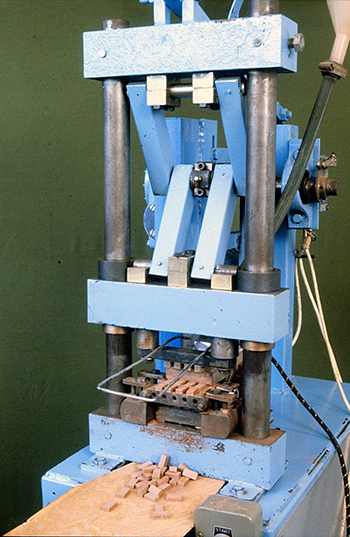 This is a machine that has been designed and made to press dry powdered clay into the required size and shape for production of the ceramic bricks, which were then used to construct each engine house in a miniature form.

The powdered clay flows from the hopper, positioned above the steel dies. With the dies full of clay the press automatically closes applying a force of 5½ tons. It is this pressure which binds the clay particles together, to form the bricks which can then be handled without damage. After pressing and before firing at 1050 degrees centigrade, the sharp edges are removed; this is done by shaking them all together in a hessian sack. The press is powered by a 0.5-kilowatt electric motor which drives a high reduction gearbox. A crank is attached to the toggle which closes the press, and it is this high mechanical advantage which generates a closing pressure of 5½ tons.

After pressing, the clay bricks are fired in an electric kiln which has been modified to simulate how ceramics would have been fired in an atmosphere depleted of oxygen. It is this reduction of oxygen within the kiln which produces the great variety of colours found when the kilns of the eighteenth century were fired by coal. After cooling a hard ceramic brick was formed, this was then used to construct each engine house in miniature. With an additional arrangement of dies, the press can easily be used to form the ceramic tiles, which were needed to complete the roof of the building; each tile has two nibs to hold them into place onto the roofing laths. 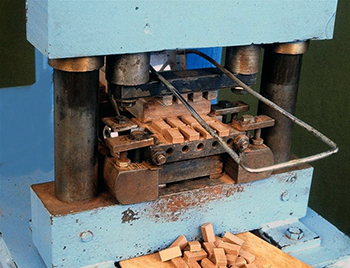 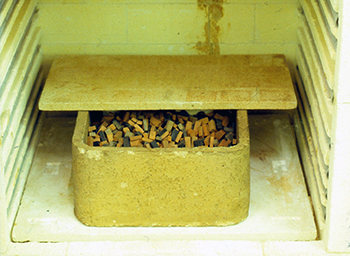 A closing pressure of 5 ½ tons is needed to bind the clay particles together for the firing process to become successful.

The electric kiln and saggar contain 3,000 bricks, which are were placed upon a bed of powdered coal to replicate a reduction firing and produce the variety of found in the bricks of the eighteenth-century. 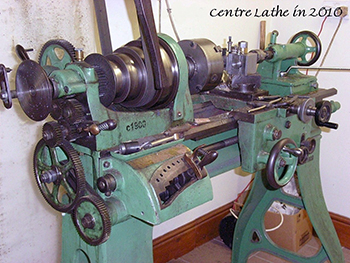 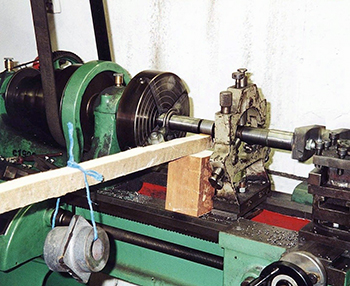 All the historical models on this Website were machined using a lathe which was made in about 1900 by the Vernon Machine Co. Worcester Mass. . I have used this lathe for over 55 years, which was given to me by my father for my seventeenth birthday. Every component from 10 BA nuts and pins to the crankshaft used on the Dodman traction engine were machined on this belt lathe. The crankshaft is shown below.