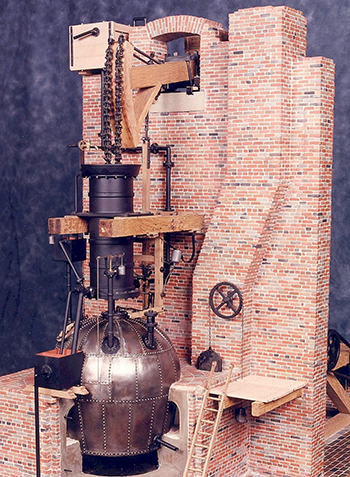 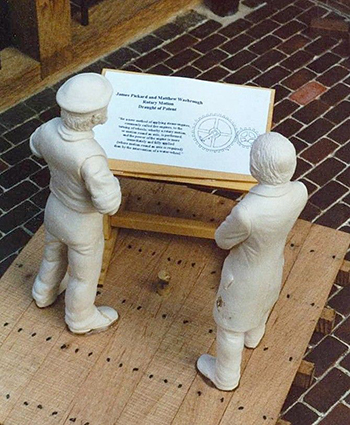 This is a model of an engine which operated on the principles first developed by Thomas Newcomen in 1712. However, it is the first engine in the world to directly achieve rotary motion by the use of a crank and flywheel. This engine was designed and built by a Bristol engineer called Matthew Wasborough in 1779, for James Pickard who was a Birmingham manufacturer. James Pickard’s manufactory was situated on the site of the present Snow Hill railway station.

Engineers had tried to harness the movement of the atmospheric engine for almost seventy years to directly drive machinery. When Matthew Wasborough first built this engine in 1779 his mechanism for providing rotary motion was by the fitting of racks and pinions. This method proved to be unreliable and, James Pickard removed this mechanism and fitted a simple crank and flywheel.

The Snow Hill engine then became the first engine to provide rotary motion by this new method. A patent was granted for this idea on 23rd August 1780. James Pickard and Matthew Wasborough can be seen reading through this patent in the accompanying photograph. The model is a generic representation of what the Snow Hill engine most probably looked like in 1780 because the only known details are that the powering cylinder had a diameter of 30 inches and the piston made a stroke of seven feet.

The details needed to construct this model were gathered together over a period of 20 years. The main source of reference was drawings and descriptions of other eighteenth-century engines. Every part of the engine in miniature was handmade.

The central supporting wall for the main oscillating beam contains 9,200 ceramic bricks, and to complete the boiler 1,749 rivets were needed. The granting of the patent for the sole use of the crank on this engine changed the course of engineering history. It prevented other engineers from obtaining rotary motion by this means. James Watt on his engines had to use the Sun and Planet gears to avoid litigation with James Pickard.

With all the planning and the research completed, the construction time for this historical engine was 3,000 hours. For the engine house a special die was made for the brick machine. The floor is now constructed from engineering blue bricks.

Shown here is a view of the haystack boiler with the powering cylinder positioned vertically above.

Matthew Wasborough on the left can be seen with James Pickard on the miniature reading through the patent which was granted for the crank method of obtaining rotary motion using a steam engine. These ceramic sculptures are made to the same scale as the engine 1/16 scale.