Adam Heslop and his Winding Engine

At the William Pit

Work began to sink the William Pit in 1804 on the northern shore at Whitehaven in Cumbria; the necessity to sink this pit was to extract the coal from the rich seams that extended beneath the Irish Sea. The first baskets (corves) loaded with coal were hauled to the surface by Adam Heslop’s winding engine on the 10th March 1806. The mine was in continuous production until closure in 1954; by this time the workings had extended for almost three miles under the sea.

The William Pit in 1814 was described as “The most dangerous pit in the kingdom” because throughout the the explosive flammable gas ‘Firedamp’ (methane) was present. 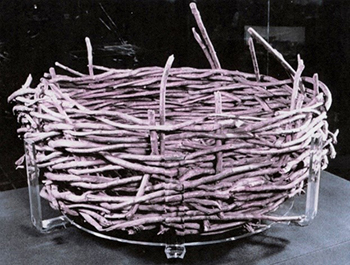 An original small corf which can be seen preserved at the Caphouse Museum near Wakefield. Shown on the engine in miniature the loaded corves are being transferred onto a track before being hauled to the surface by Adam Heslop’s winding engine. 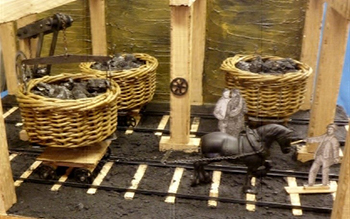 The danger in this and many other mines accelerated the development of Humphry Davey’s safety Lamp and, in about 1816 this lamp was first used at the William Pit for trials. This area of Cumbria had rich deposits of coal which extended for almost a hundred square miles, with mining taking place from Whitehaven, to beneath the Solway Estuary.

Many of the collieries around Whitehaven were owned by the eminent and wealthy Lowther family. This region’s most brilliant mining engineer, Carlisle Spedding who was also the mining steward to the Lowther’s, invented the Spedding Wheel* or steel mill, the first form of safety lamp, which was used in pits throughout the land for almost a century until being superseded by the Davy Lamp. * The Spedding Mill consisted of a cranked gear-wheel which rotated a disc of hardened steel, against which a sliver of flint was pressed. The sparks this generated gave a glimmer of light sufficient to permit a man to work at the coal face. Although there was no continuous flame, the device was not completely safe and it was known to have caused explosions. However, it was far safer than other forms of illumination then available in the early 19th century. 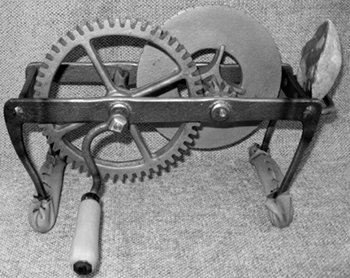 A replica of the Spedding Mill which was rotated throughout a working day by boys from the age of eight.

Sinking of the Pit

Sinking commenced in May 1804 and by March 1805 the shaft had reached a depth of 552 feet, this being an average descent of twelve feet per week. The final depth was 630 feet, and the shaft had a diameter of fifteen feet. This was accomplished in appalling conditions by men using only hand tools, however; when hard rock was encountered the assistance of gunpowder became necessary. The spoil from the shaft was brought to the surface by horse powered gins with forty gallons held in each tub. In total more than 55,000 loads were removed.

When the full depth had been reached, the shaft, was lined from top to bottom with timber, and then divided into three sections, two for the winding of miners and coal, and the third for removing the flood water from the mine workings. In the Cumberland Pacquet Newspaper on the 26th March 1805 was written how this remarkable achievement was completed. 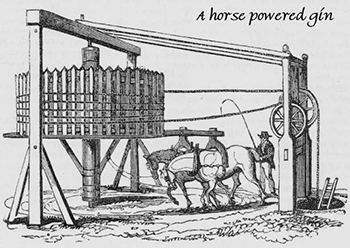 As a temporary measure a horse-powered gin; the one that had been used to construct the shaft was used to haul the coal to the surface before; the winding engine had been commissioned.

The first engine to be used at the William Pit was made to the design of Adam Heslop, a design he had patented in 1790. This engine which became patent number 1760 stated that his method of operation “lessened the consumption of steam and fuel in fire-engines or steam engines”.

This unique method of operation was ideally suited to a winding engine, because, powered in this way it became self-starting. And with some clever positioning of the crank, by the operator, the engine also became self-reversing.

The William Pit engine was made at the Lowca Ironworks of Heslop, Millward and Johnston. From 1800 brothers Adam, Thomas and Crosby Heslop operated from this site supplying atmospheric engines to the northern collieries, and over the next ten years fourteen engines are recorded to have been made. Many of Heslop’s engines had long working lives; three were working at collieries in Shropshire for almost 100 years.

The engines designed by Adam Heslop were successful and this one at the William Pit operated from 10th March 1806 until it was superseded in 1850 by a high pressure engine this was more efficient and provided more power. 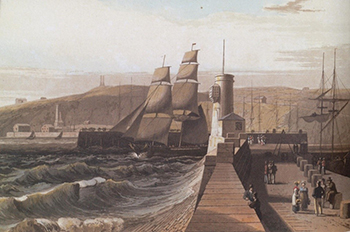 William Danniell’s aquatint painted in 1814 showing the harbour at Whitehaven with the William Pit in the background. 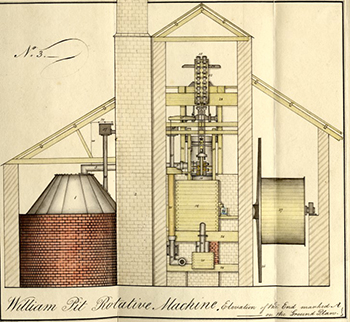 These drawings were made in 1808 two years after the engine was assembled at the William Pit and are reproduced by kind permission of the Nicholas Wood Memorial Library Newcastle-upon Tyne. These drawings have been used as references when constructing the engine in miniature.  In Cumbria the collieries were usually named after the Christian name of the mine owner, in 1806 the owner was William Lowther. 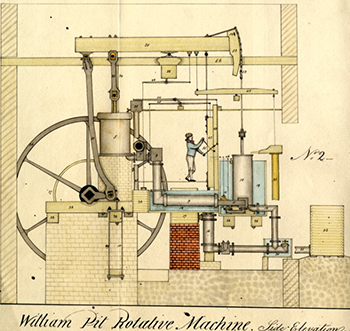 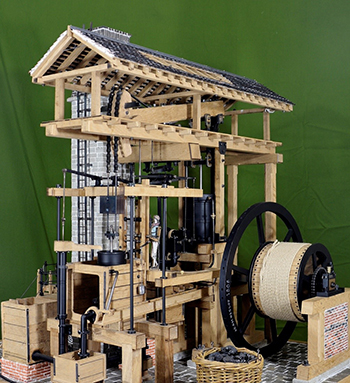 This photograph shows the completed engine built to full size- (¾ inch to the foot). A great deal of planning was needed to assemble the component parts without the engine house walls for support because; the large oak beams would have been incorporated into the side walls. When Adam Heslop assembled his engine at Whitehaven in 1806, it would have been upon these beams that the component parts of the engine were secured into their working positions. The flywheel shown here has a diameter of 15 inches, also a basket (corf) loaded with coal can also be seen. 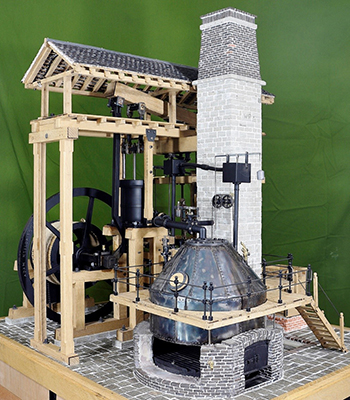 Shown here are the engine and boiler, with the oscillating beam within the tiled roof of the building. The chimney shown here has been lowered; if this had been built exactly to scale the model would have proved difficult and not easily removed from my workshop. The floor of the model is covered with slabs of micaceous sandstone from a quarry at Bollington in Cheshire these were cut to size with a diamond slitting saw, and surrounding the furnace can be seen engineering blue bricks all made to the scale of  ¾ inch to one foot. 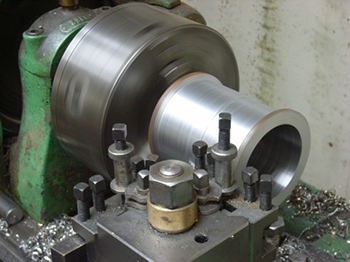 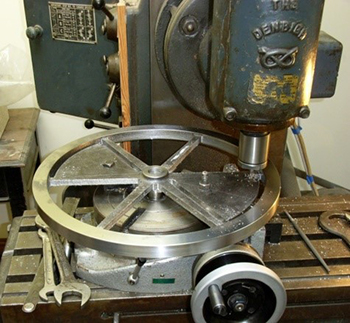 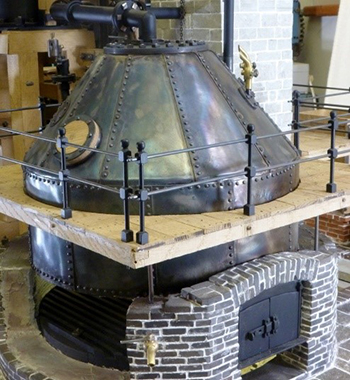 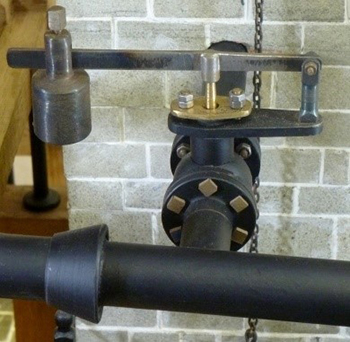 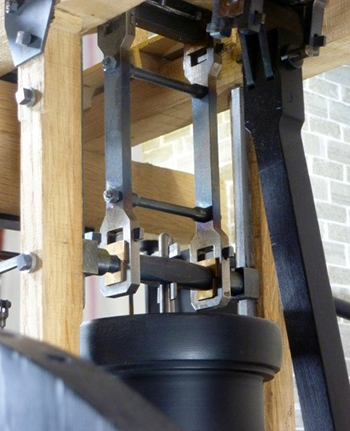 The boiler with a conical top is constructed from 24 steel plates all held together with 715 dome headed rivets, on the model this boiler has a diameter of 10 inches. The second photograph shows how the pressure of the steam was regulated with the the surplus steam being vented into the chimney stack. Also shown is the method used by Adam Heslop to achieve a parallel motion for the piston rod, strong, cast iron guides were used.
Shown here is the mechanism used to control the flow of steam into the condenser and the hot cylinder, also shown is the method used by Adsm Heslop to automatically reverse his engine, by accurately positioning the crank determined the direction of rotation of his engine.

STARTING THE ENGINE WITH AN EMPTY BOILER 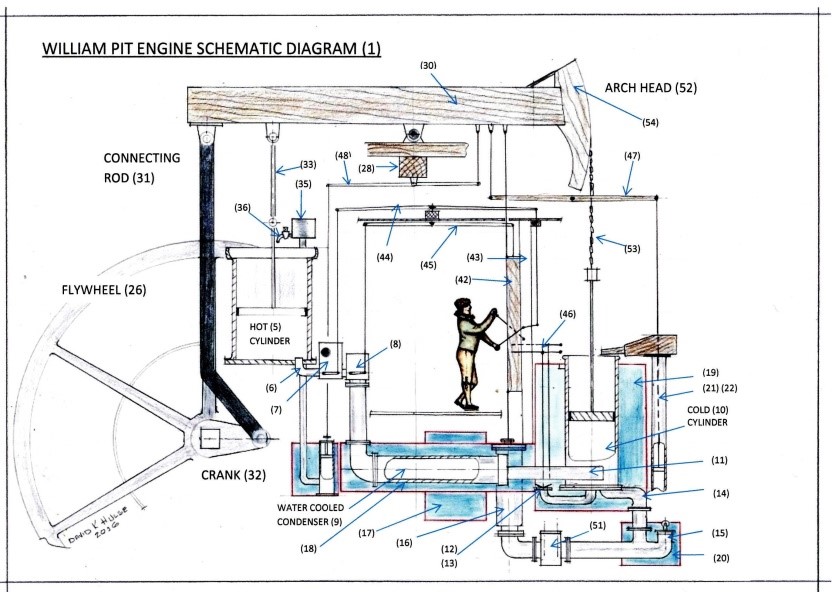 The boiler was first loaded with 2,500 gallons (11250 liters) of water, this is half the internal capacity, this was regarded as the ideal working volume, the water most probably entered by first removing the wooden inspection hatch, the exact method used could not be discovered.

An intense fire would have been needed, and when the water had reached the boiling point, and the steam had reached a working pressure 3 p.s.i., (0.2 bar) the operator would have manipulated the levers, first he closed the valve at the base of the hot cylinder (7) by closing this and opening valve (8) the steam was directed into the condenser, and also filling the void beneath the piston of the cold cylinder. When this was taking place the air within the system would have been escaping through the blow valve (15) with all the air expelled and replaced by steam, the operator closed valve (8) and initiated both water sprays, one into the condenser and the other into the cold cylinder, (levers 46) a vacuum had now been created, it was generally accepted with an engine in good workng condition that a vacuum of 0.6 bar could be achieved, this equating to a working pressure of 9 p.s.i., and when acting upon a cylinder of 28 ½ diameter would have exerted a downward force of 2.5 tons (2,500 kg).

The cold cylinder was unable to move the engine because the space beneath the piston in the hot cylinder was sealed. The operator then ensured that the crank was in the position shown in the schematic diagram ie. if the basket was to be lowered into the mine. By opening valve (7) low-pressure steam was allowed to fill the space beneath the piston in the hot cylinder, 3 p.s.i., exerting an upward force of 2.0 tons this combined with the load exerted by cold cylinder started the engine rotating in an anti-clockwise direction. On the completion of the first revolution the hot cylinder was powered vertically by low pressure steam and on the downward stroke by a vacuum onto the underside of the piston from the condenser. 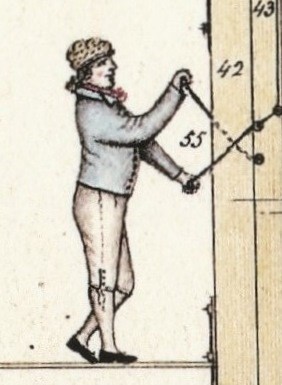 After twenty revolutions of the winding drum the basket was at the bottom of the mine, always ensuring that the engine was brought to a halt with the crank positioned 180 degrees from where it started. There was continuous vacuum on the underside of the piston in the cold cylinder, once the engine was in motion the hot cylinder provided all the energy that was needed to lower the baskets and haul the coal from the mine workings. Both cylinders were needed to set the engine into motion, however, after the first revolution the cold cylinder acted as a pump, which ensured the condensers were full of steam, before condensation to complete the next revolution of the engine.

With the coal loaded into the basket and with the crank in the oposite position the engine would now rotate in a clockwise direction and haul the basket to the surface. There as been much speculation and discussion about how Adam Heslop reversed his engine, many scholars saying they were unable to discover the mechanism he used, there was no mechanism, the direction of rotation all depended upon the position the crank had been brought to rest.

This concludes my story about the William Pit and Adam Heslop’s winding engine all brought about in my quest to research this unique engine and fully understand by constructing the engine in miniature how it operated in 1806, and by doing ensure Adam Heslop the credit he so richly deserves.