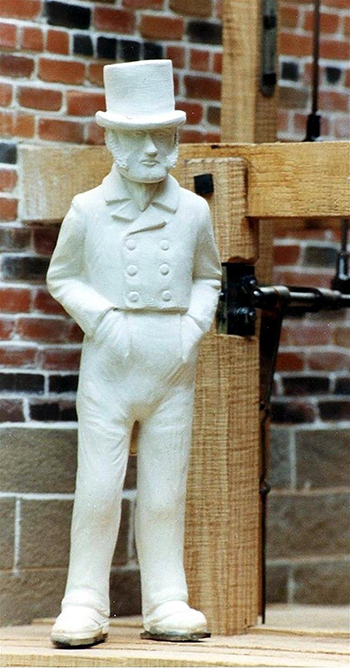 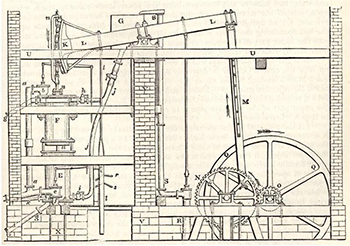 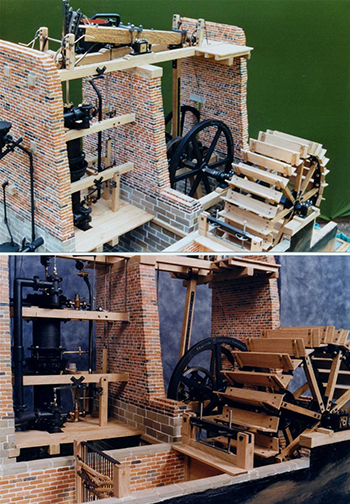 This was an engine designed in 1797 by Francis Thompson an engineer from Ashover in Derbyshire to drive a worsted mill at Arnold on the outskirts of Nottingham. Thompson designed this engine avoiding any patent litigation with the Boulton and Watt .

There is only one simple sketch of this engine which has survived and is shown here. The mill at Arnold was owned by Robert Davison and John Hawksley and, in the photograph shown here is Hawksley on one of his factory visits.

The powering force for this engine was from two open-ended cylinders one positioned directly above the other. Thompson had reverted to the principles first used in 1712 by Thomas Newcomen. This engine at Arnold was double acting, each cylinder was filled in turn with low-pressure steam (3 psi) and, after a spray of cold water, a vacuum was formed, which then drew each piston in turn through a powered stroke. The upper piston propelled the main oscillating beam vertically and, the lower piston then powered the beam down.   When the mill at Arnold was built in 1790, the drive to the spinning and weaving machines was from an undershot waterwheel. With the outbreak of the Napoleonic Wars, the demand for worsted cloth increased and the factory started working  24 hours per day to supply the increased demand. However, after two and a half days working the mill pond was empty. The engine was then used for the remainder of the week, allowing the millpond to refill.

This engine at Arnold was made to enormous proportions, from the floor level to the top of the main oscillating beam measured 42 feet. The assembled cylinders had an overall height of 23 feet. The bore of each cylinder was 40 inches with a working stroke of six feet.

This engine only operated from 1797 until 1810, until the mill at Arnold ceased production and was demolished. In 1811 and the engine was broken up and sold for scrap.

This is the only known drawing of Francis Thompson’s Arnold Mill Engine. This was taken from a 19th nineteenth-century manuscript written by John Farey.

The remaining information needed to construct the model was gathered together by studying all that is known about Francis Thompson, who also made many of the engines which were used in the Derbyshire lead mines. Only fourteen double-acting rotary atmospheric engines were made by Thompson, the engine at Arnold was the largest he ever made.

For demonstration purposes the model can be seen working atmospherically as it would have originally operated in 1797, it is the only working double-acting rotary beam engine in the world operating by the pressure of the earth’s atmosphere.

The upper photograph shows a general view of the engine built to the scale of 1/16 full size and, below written around the flywheel can be seen ‘Francis Thompson Engineer’ this method of identification was cast onto all of his engines.