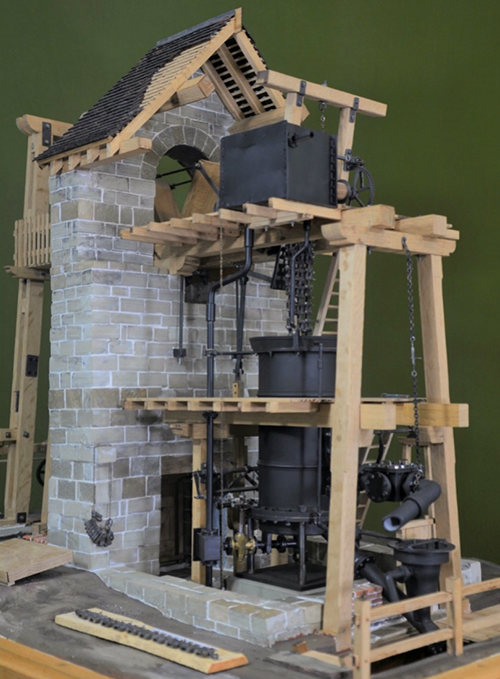 Francis Thompson (1747-1809) in 1791 designed and built an engine to remove the flood water from a colliery at Pentrich in Derbyshire. This engine is preserved, and is now displayed at the Kensington Science Museum in London. Engines in the eighteenth century derived their power from the pressure of the earths’ atmosphere acting against a vacuum that had been created by the condensation of steam beneath the piston, within the powering cylinder, these engines became known as atmospheric engines.

In 1819 the Pentrich engine was dismantled and reassembled at Staveley Lower Ground Colliery, where it was to operate for the following twenty years.

In 1839 the engine was again dismantled and returned to the Pentrich Colliery where it continued to remove the flood water until 1915.

The powering cylinder had an internal diameter of 57.5 inches and the piston completed a working stroke of eight feet, for each minute six working strokes were completed, lifting 166 gallons of water from the mine workings 360 feet beneath the engine, enabling the miners to work without the constant fear of flooding. 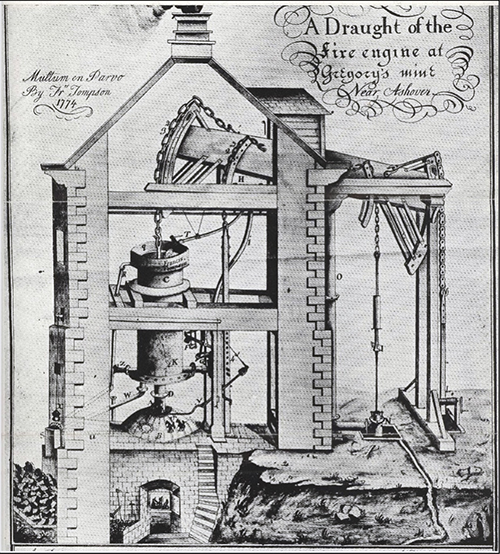 Francis Thompsons’ drawing of 1774. His name can clearly be seen around the cylinder top, also the Latin inscription Multum en Parvo. (A great deal in a small compass) and his signature, on this occasion he uses the spelling Tompson. 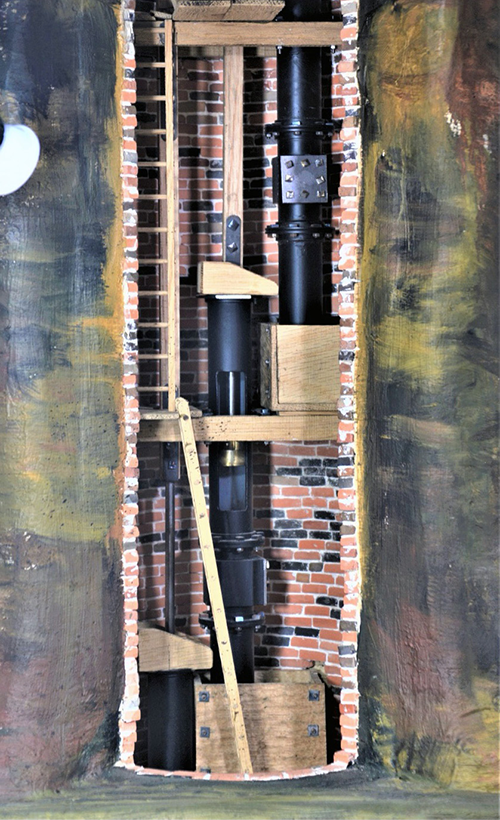 Francis Thompson was born at Winster in Derbyshire; however, his exact date of birth is unknown. He became an engineer of considerable eminence during the last twenty-five years of the eighteenth-century. There is much fragmented evidence about Thompson.

Many of his letters and design sketches survive including a large drawing of an atmospheric engine which was drawn in 1774. This drawing shown on the left is now preserved at the Derbyshire Records Office at Matlock. Thompson was a typical representative of the pioneers of the industrial revolution who, by sheer merit and hard work, gained for themselves a measure of fame. He became well known in this lead mining area of Derbyshire, and also became known wherever water was a problem in any mining industry.

He designed pumping engines used as far afield as Leeds and South Wales. John Farey in his book, A Treatise on the Steam Engine describes Thompson as an operative engineer who had an extensive practice in that district and a practical engine builder who designed and erected Newcomen type engines for the lead mines of Derbyshire.

Thompson in 1782 designed a large family house at Ashover from where he conducted his engineering consultancy; he never operated from a factory of his own. Ebenezer Smith at the Griffin Foundry at Chesterfield was his main supplier.

Francis Thompson shows by this drawing he was fully conversant with the working principals of an atmospheric engine; this would have given the Pentrich Mine owners the confidence he could design and built the large atmospheric engine which was needed to remove the flood water at their colliery at Pentrich.

A considerable effort has been made to recreate this model of the Pentrich Engine how it would have appeared in 1791, without the modifications that would have taken place during its working life of 125 years.

One example of this, in 1791 the overhead rocking beam would have been constructed from a single baulk of English Oak, in c1840 this bean was replaced by the cast-iron beam shown on the drawing by C.O. Becker in 1919.

When the engine was dismantled drawings and photographs made by William Thompson Anderson and the drawing by C.O. Becker in 1919, have allowed the creation of this model possible. Every part is individually made from materials which would have been available to the original constructors of the late eighteenth century; 240 links of the operating chains are individually hand forged. 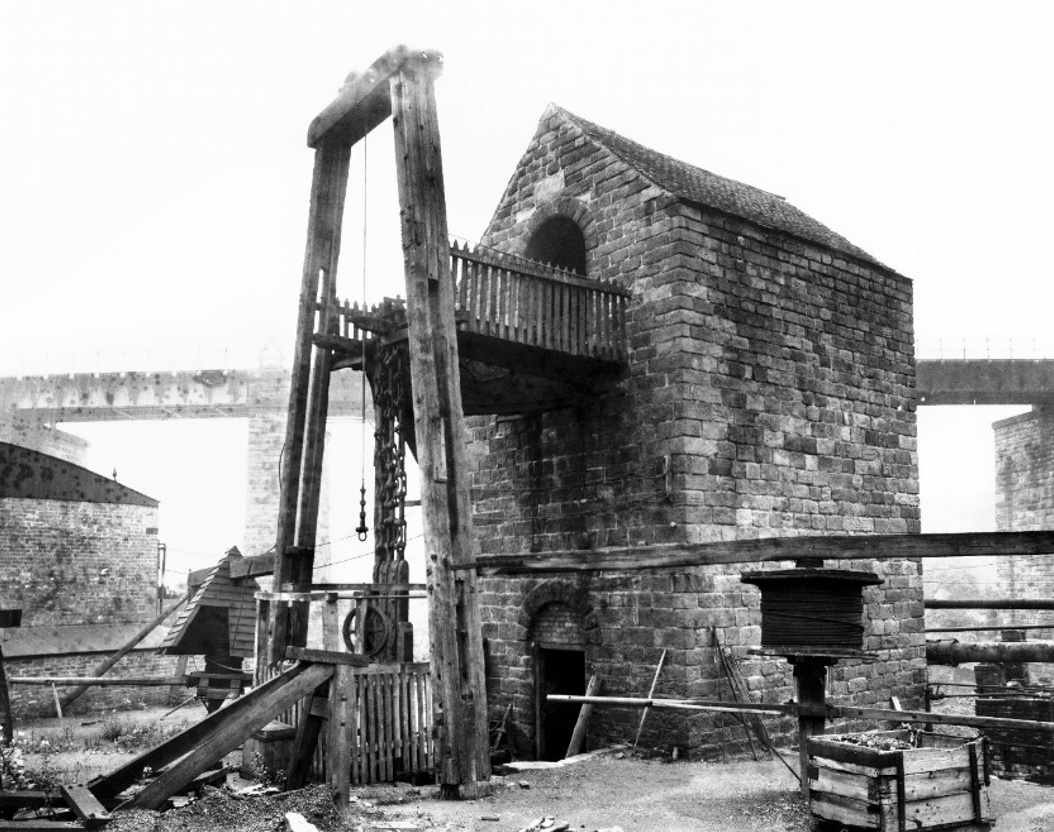 This photograph was taken by William Thompson Anderson in c1915 showing the Pentrich Engine after a working life of almost 125 years, the main oscillating beam was now cast from iron. 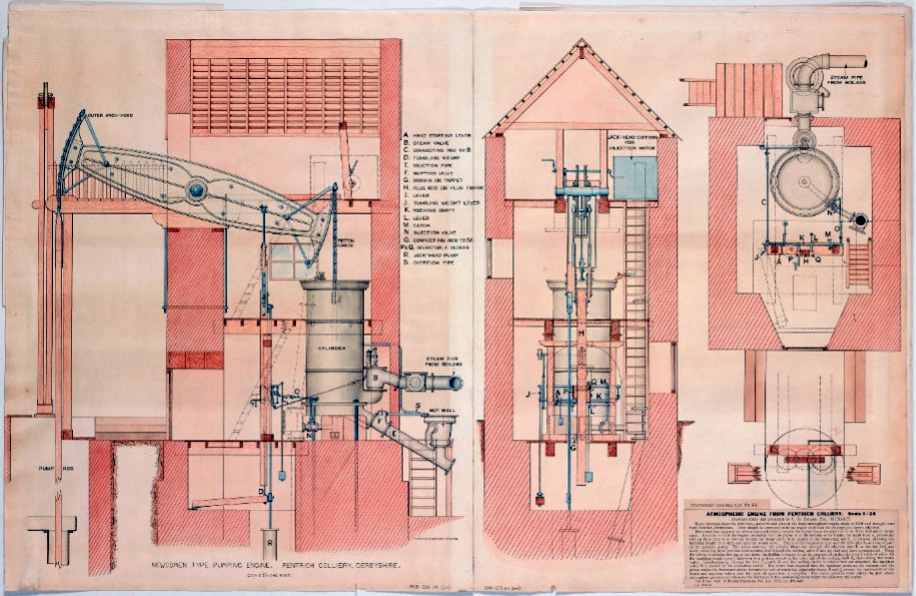 These three views of the engine were drawn and presented to the Science Museum by C.O. Becker in 1919. Before formulating my plan, to recreate this engine in a miniature form this drawing was printed to my chosen scale of the model; 1/16 full size or ¾ inch to one foot. Always remembering the modifications that had taken place during the engines working life; The model was to represent how the engine would have appeared on completion by Francis Thompson in 1791. 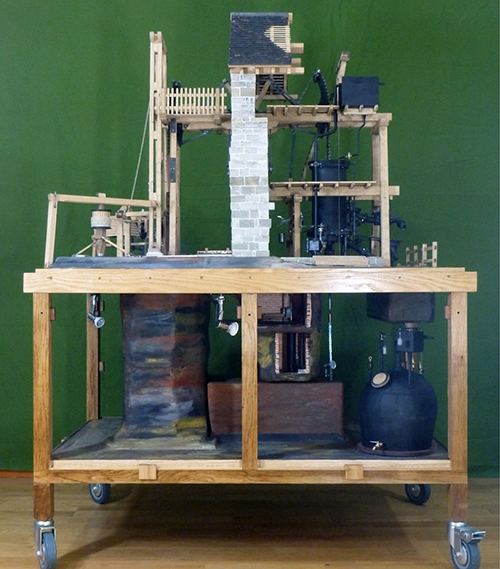 This view shows the model above and below ground, from the basement to the apex of the roof this represents almost 80 feet. The engine is made only from materials which would have been available the engineers of the eighteenth century. The gable wall is constructed from 1,340 individual carboniferous sand stone blocks, cut to size with a diamond saw. 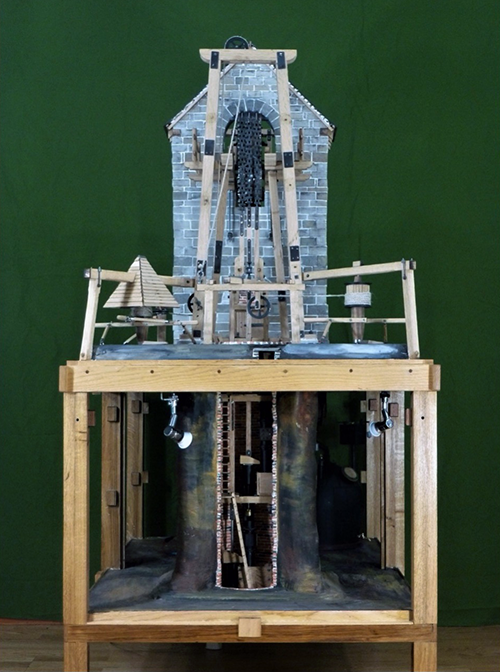 An end view showing in section the pumps within the shaft leading into the mine workings; three pumps were used; – these pumps lifted the flood water from the mine workings 360 feet beneath the engine; -this was called stage pumping, using this method the pressure on each pump would have been divided equally. The pressure of water by gravity alone at this depth would have been c180 lbs/sq. inch, this would have exceeded the safe working pressure of a single pump at the bottom of the mine.

To construct this sectional shaft on the model 3,500 ceramic bricks were used.

Shown here are the arch head chains connected onto the wooden beams before descending to operate the pumps within shaft leading into the mine workings. 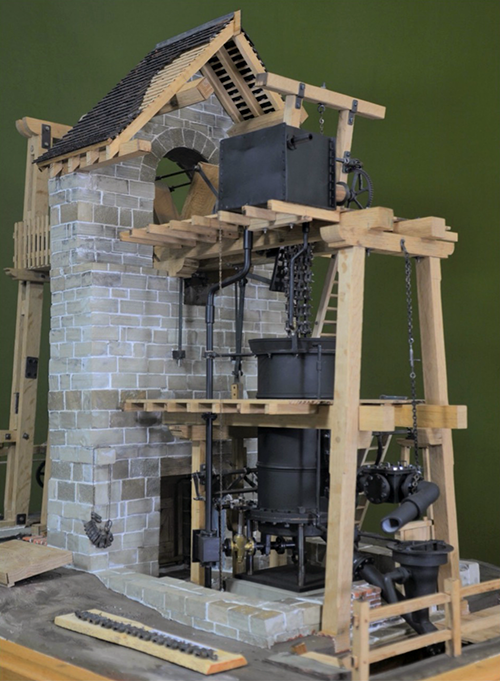 This view shows how the powering cylinder would have been arranged within the stone building; – for such a large and powerful engine the internal dimensions of this building were very restricted; -12 feet wide and 13 feet long, the gable wall supporting the main operating beam was substantial with a thickness of almost 6 feet.

At the base of the cylinder of the original engine can be seen the manufacturers name, the full name, Ebenezer Smith at the Griffin Foundry Chesterfield

Shown here is the main oscillating beam and arch head supported by the gable wall. The box of bricks is designed to finely balance the operation of the engine. 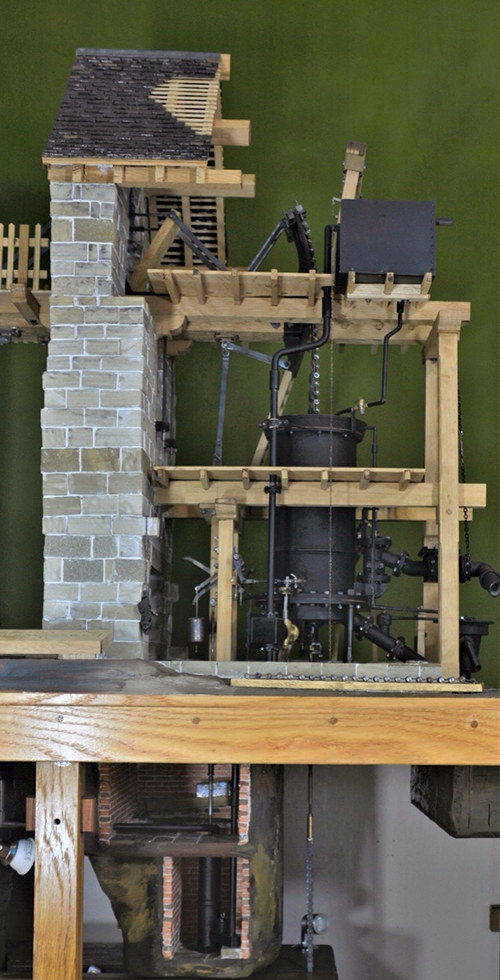 This view shows the full height down to the sump below the engine house floor. This sump contained water which was then lifted by a pump into the header tank positioned on the upper floor of the engine house. This tank supplied water to the spray at the base of the cylinder.

It was almost 60 feet from the base of the sump to the apex of the building. 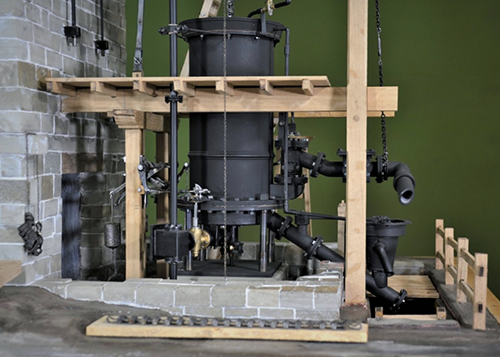 Shown here is the main powering cylinder 57.5 inches internal diameter with a piston stroke of eight feet, the estimated weight of this cylinder is between four and five tons. For clarity the cylinder on the model is shown mounted upon four vertical columns. 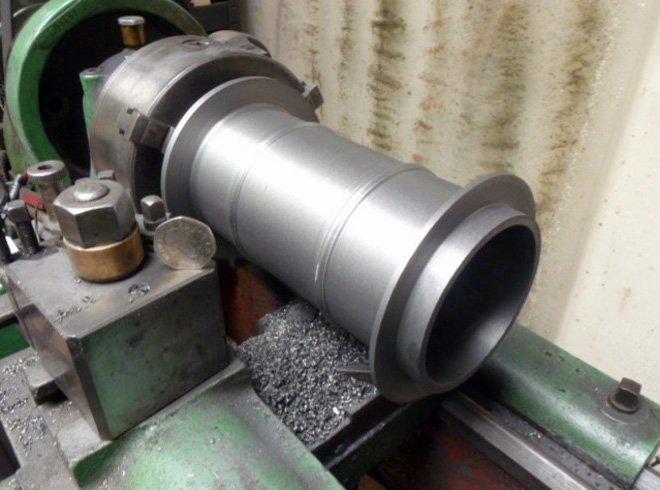 No castings have been used in the construction of the model shown here is the cylinder almost finished in my 120 years old lathe. Before machining this cast-iron blank had a weight of 42 lbs. the finished cylinder now has a weight of 3.5 lbs.

This video shows the operation of the powering cylinder together with the valve control levers;-all operated by the up and down movement of the main beam of the engine. 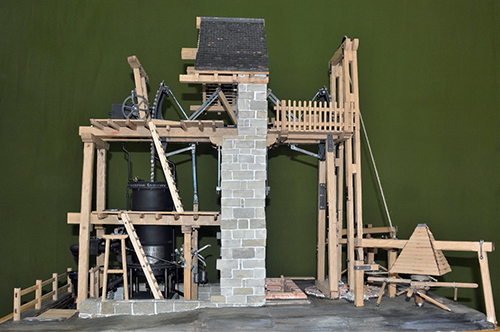 Front elevation showing the main component parts of the installation; – note the water tank on the upper floor, from this tank water flowed through the pipework leading into the water spray within the base of the cylinder. 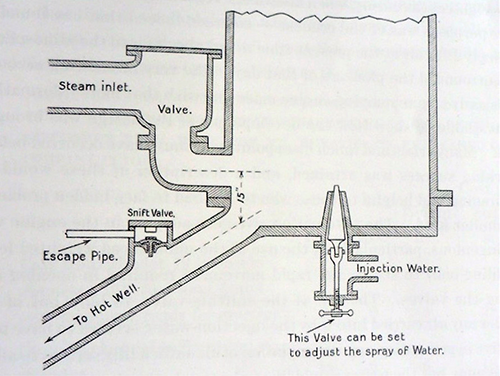 Francis Thompsons’ patented method of condensing the steam within the powering cylinder, the conical shaped valve was used to regulate the spray of water.

The main beam operating at 6 oscillations per minute, and for each oscillation almost 30 gallons of water was removed from the mine workings.

A view showing the floor levels within the engine house and the wooden structure above the shaft leading into the mine workings. 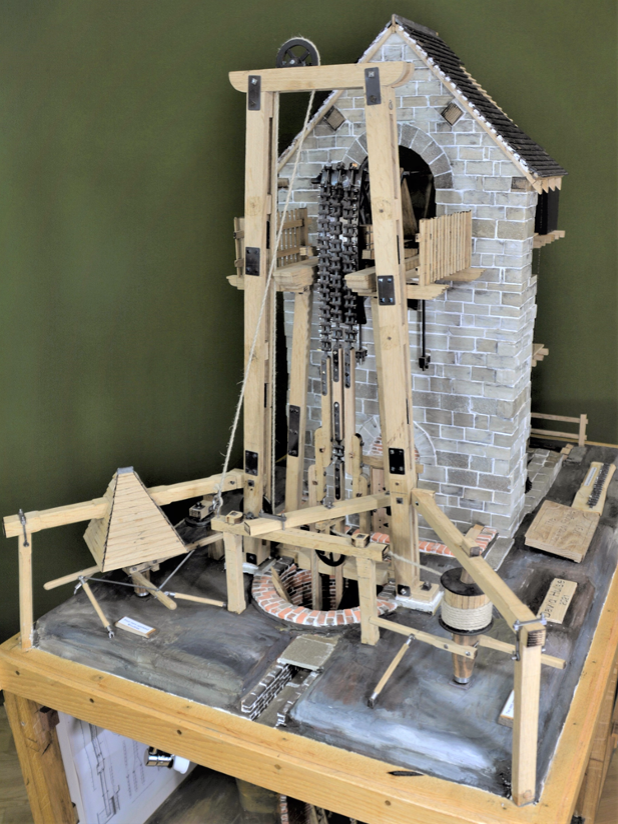 Shown here is how all the component parts fit together within the engine house. Carboniferous sand stone was used to construct this gable wall, all 1340 blocks were individually cut by hand using a water-cooled diamond saw; – a very messy job! 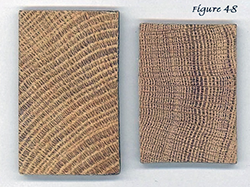 Shown here is the wooden structure supporting the pulley for manoeuvring the pumps into their working positions, within the mine shaft. All the wooden framework on the engine in miniature is constructed from Japanese Oak. English Oak and Japanese Oak are shown here. Japanese Oak has a closer grain suitable for constructing frameworks in miniature. 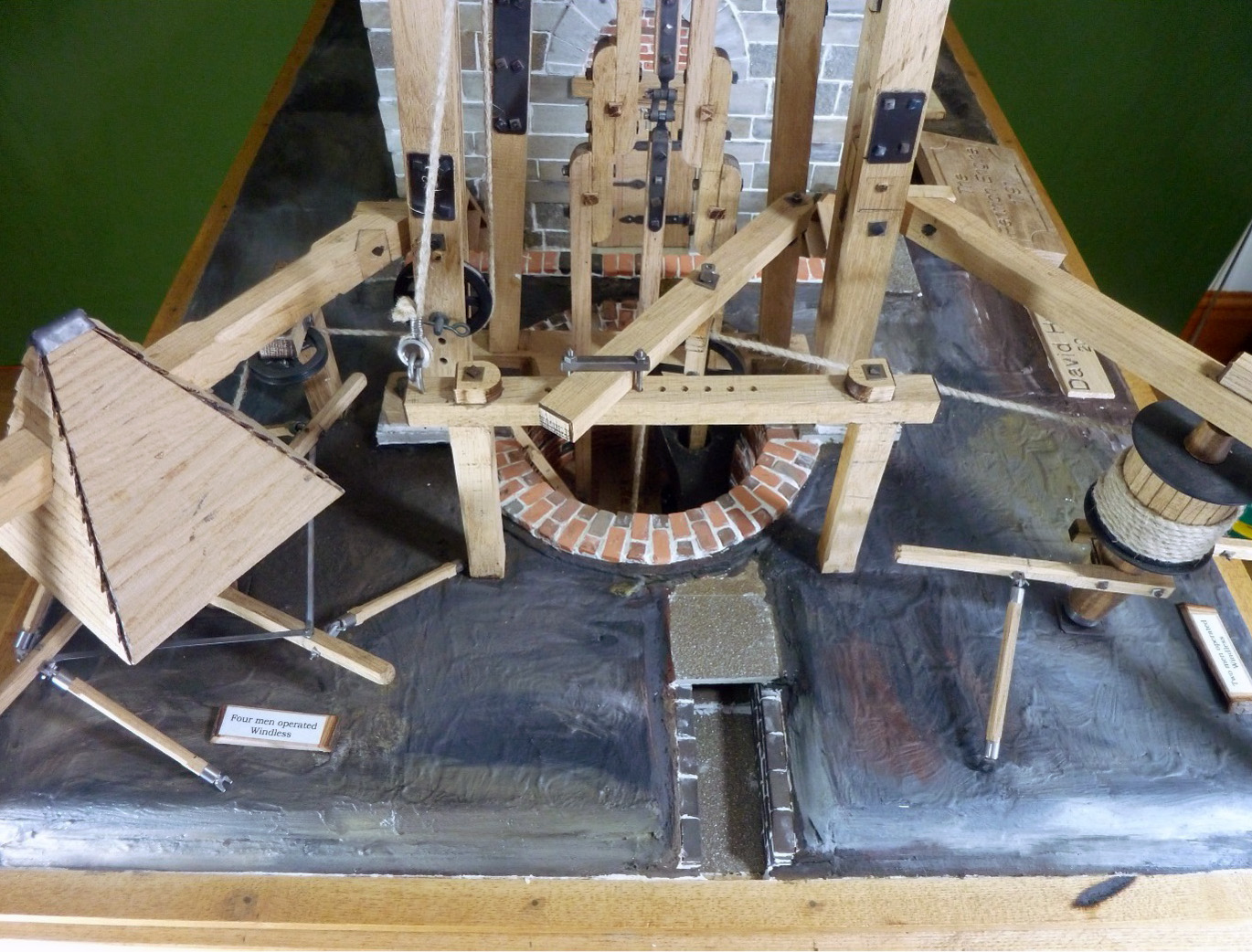 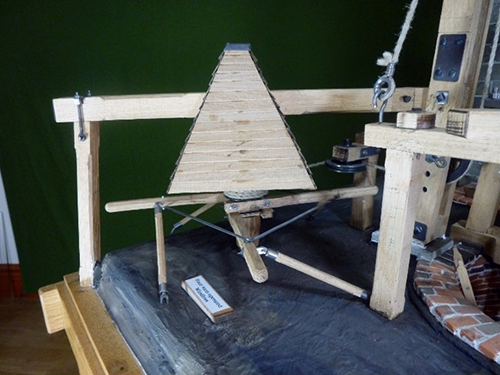 The pyramid shaped cover was needed to protect the hessian rope because at almost 400 ft long in 1791 this would have been very expensive, and keeping this dry would have extended its working life. Note the trailing poles designed to prevent the windlass from freely revolving backwards. 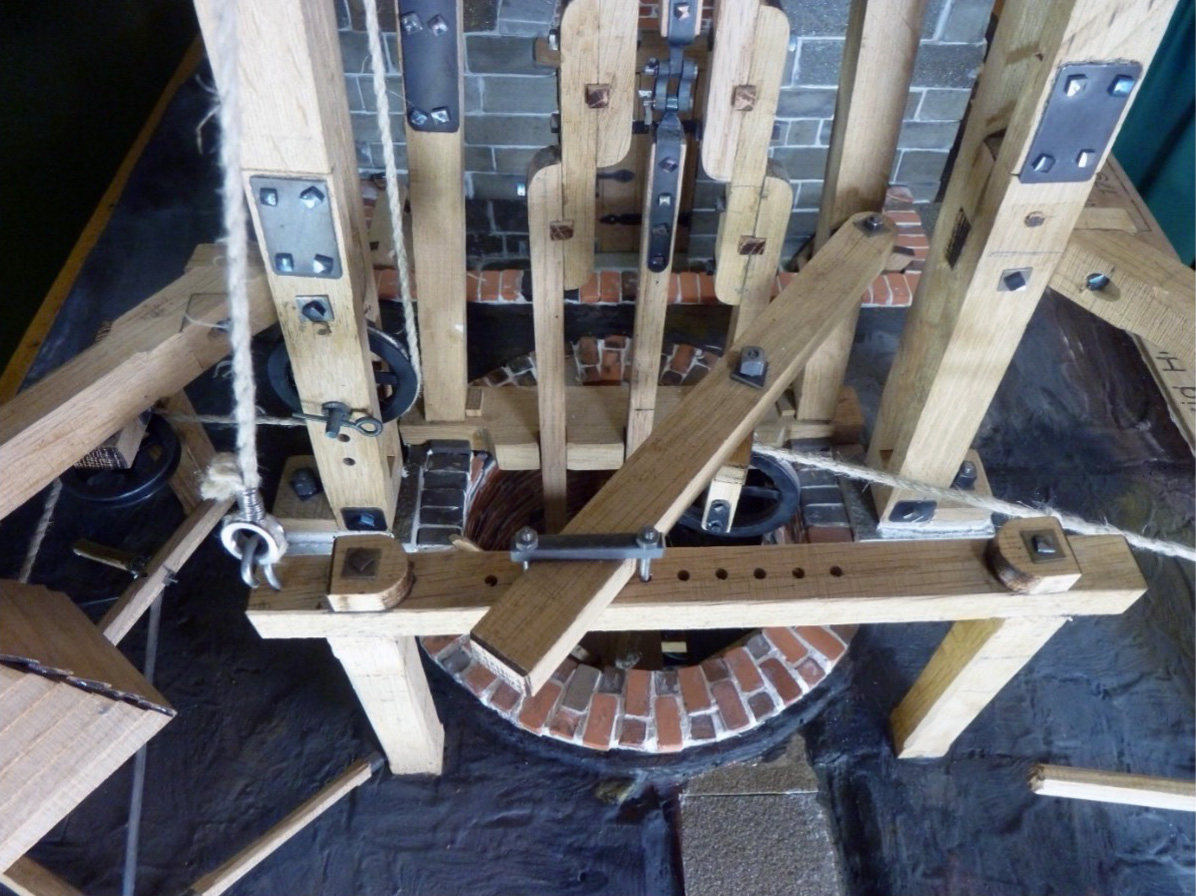 Suspended from the arch head chains three beams can be seen descending into the well to operate the pumps; -on the model these beams are now steel encased with oak; -without the steel these would not have been heavy enough to operate smoothly.

This section shows the pumps within the shaft leading into the mine workings; -this was known as stage pumping, by using three pumps the working pressure was equally divided between each pump. Hopefully this will give an understanding how the flood water was removed from the Pentrich Colliery in 1791.

The arch head chains, each link is individual and is forged by hand. Two hundred and forty separate parts were needed to complete the six lengths of chain. 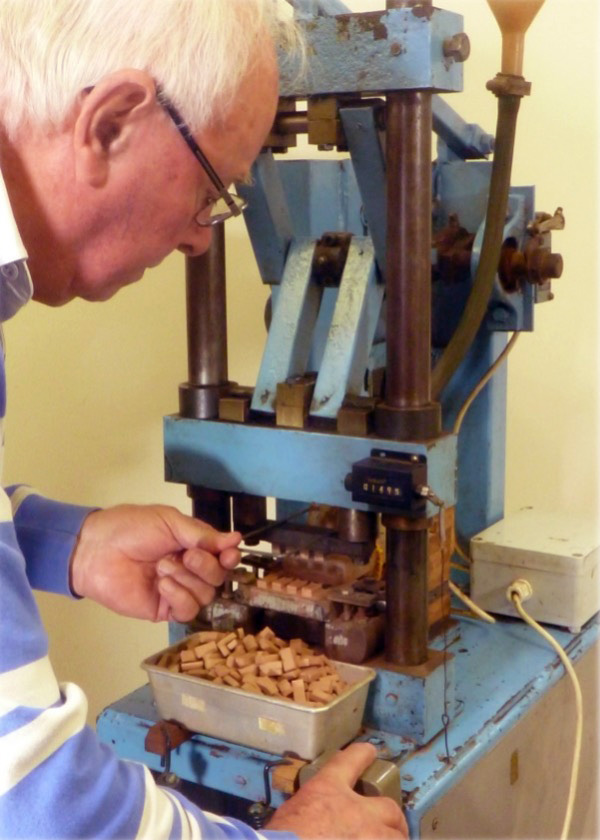 Busy miniature brick making 3,500 were used to construct the sectional shaft leading into the mine workings. With all the engines I have made including prototypes, this machine I designed and made in 1975 has now produced 190,000 miniature bricks and, 14,000 roof tiles. 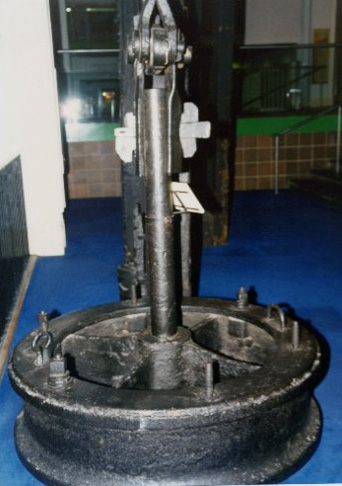 This is the design of the piston used by Francis Thompson on his atmospheric engines.  This has been preserved in the Science Museum. 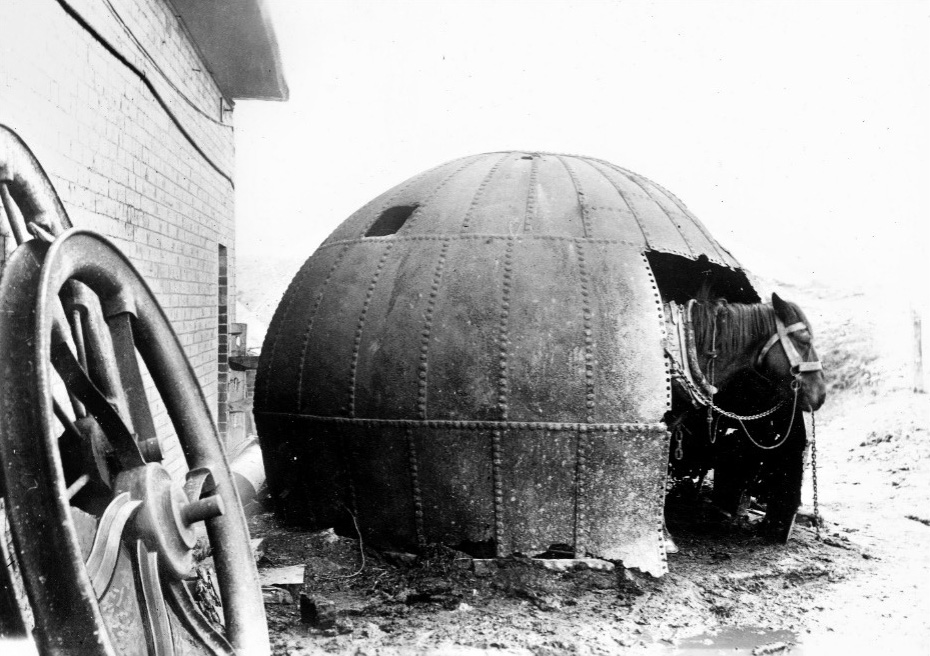 This photograph of horse sheltering in a well-used beehive boiler is taken from William Thomson Andersons’ NOTES ON AN OLD COLLIERY PUMPING ENGINE (Pentrich Engine site) published in 1917.